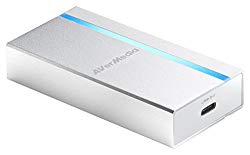 Extreme Cap UVC is a plug and play HDMI to USB 3.0 converter that sends videos to your computer for capturing and streaming. Simply connect an HDMI video source to your computer through Extreme Cap UVC and you are ready to record or stream uncompressed video up to 1080p60. It is built for the professionals, so whether you are broadcasting on the field or recording in the studio, Extreme Cap UVC can handle video upscaling , color space conversion, and more onboard instead of overloading your CPU. It is compatible with Windows, Mac, and Linux operating systems, and is UVC-compliant, so it works with various mainstream editing and streaming software. Compatible Software (including but not limited to):OBS (Windows, Mac), XSplit (Windows), Wirecast (Windows, Mac), Adobe Flash Media Live Encoder (Windows), DirectShow (Windows), DirectSound (Windows), Edius Pro 8 (Windows), vMix (Windows), QuickTime Player (Mac), VLC (Mac), Safari (Mac), Firefox (Mac), Chrome (Mac), Skype (Mac)