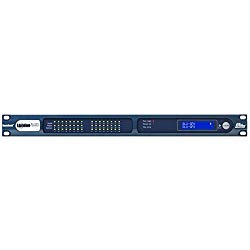 The Soundweb London BLU-GPX is a network-controlled GPIO expander which facilitates the cost-effective addition of Control Inputs, Logic Outputs, and Relays to systems requiring extra analog control/interfacing capability. The BLU-GPX features the same rich palette of Logic Objects found in other Soundweb London devices, two PoE-enabled Ethernet ports for communications and primary power, a 12VDC power connector for secondary power, a RS-232 port for compatibility with serial devices, a bank of user-configurable front panel LEDs, a user-configurable front panel LCD, a user-configurable piezo buzzer for audible indication, and locate functionality. The BLU-GPX has 36 Control Inputs. As with the Control Inputs found on other Soundweb London devices, these Control Inputs can be connected to contact closures for controlling binary parameters, resistor ladders for controlling multi-state parameters, or potentiometers for controlling continuous parameters. The BLU-GPX has a software-programmable 4 kHz piezo buzzer for audible indication of user-defined events. A bi-directional locate function allows devices to be identified both from and within HiQnet London Architect. The BLU-GPX and the other members of the Soundweb London family provide the building blocks of the perfectly tailored system solution.