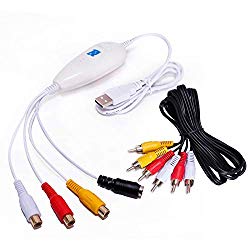 With this adapter, you can capture the analog video, such as movies, TV shows, or life video to your computer. You can also use it to capture the video from some cameras. Once the video is captured to your computer, you can edit the digital video and share them to your iPod, PSP, Mobile Phone or upload them to internet. VC159 USB 2.0 Video Capture works for both Windows(7 or later) and Mac OS X well. It includes Honestech video capture and edit software for Windows OS. For Mac OS X, you can capture video by QuickTime Player directly. SYSTEM REQUIREMENTS OS: Windows 7 or later; Mac OS; Linux CPU: 2GHz or above 1G RAM or above VGA card with 64MB memory One available USB 2.0 port