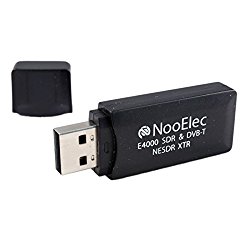 The newest member of our NESDR series is now available, the XTR! XTR stands for eXTended Range. Containing an genuine, ultra-rare Elonics E4000 tuner chip, these devices are capable of receiving frequencies up to 2300MHz. As with other SDRs, the exact frequency range capability varies somewhat from unit to unit. In terms of size, the NESDR XTR is closer in size to the NESDR Nano than the NESDR Mini & NESDR Mini 2. The shell is 43mm in length (excluding male USB plug), 20mm in width, and 10mm in depth. An important advantage of the XTR is its lower power consumption, which can be critical for portable and embedded applications. The XTR has a current draw of approximately 170mA at 5v DC, approximately half of the power consumption of the NESDR Mini, NESDR Mini 2 & NESDR Nano. There is a coverage gap, known as the 'L-band gap', near the 1100MHz-1200MHz range. We find that the E4000 performs better than the R820T at under about 450MHz, and above about 1500MHz. Of course, it has expanded range beyond the 1750MHz capability of R820T and R820T2-based tuners. We would not recommend this dongle if you are interested in receiving ADS-B (1090MHz)--an NESDR Mini or NESDR Nano is much better suited for that purpose. However, for MF, HF (with a Ham It Up), VHF, and UHF above 1500MHz, the XTR is a better-performing unit. This custom NooElec SDR is a modified DVB-T USB dongle tuned for SDR usage, including upgraded crystal, capacitors and inductors compared to generic devices. Full compatibility with a large array of software packages, such as MATLAB: http://www.mathworks.com/hardware-support/rtl-sdr.html, HDSDR, SDR Touch, SDR#, Planeplotter--too many to list. The perfect device for learning software defined radio, on the cheap. Amateur radio, police & fire scanning, trunking, satellite images--you name it, this little guy can probably do it. Outperforms many devices over 5x its cost!